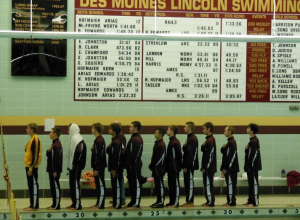 The Rails men’s team is small but mighty! They have faced a few opponents so far and come away with some new personal bests and swimmers ranked high in the Power Rankings.

Some great season swims so far include:

The Rails have been practicing over winter break to prepare for the second half of the season, where they’ll face several conference opponents. So far, they’ve faced Ottumwa and the meet ended in a 84-84 tie. The Rails have also swam to victory against Hoover/North with a final score of 94-74.

A small group of Varsity swimmers will also be traveling to Cedar Rapids in mid-January for the Rails first-ever appearance at the Jim Voss Invite. This elite invite (hosted by Cedar Rapids Washington) will feature some of the best schools in Iowa, Wisconsin and Illinois. The guys are looking forward to the competition and hope to come away with even faster times to nab great district seeds.

We look forward to seeing all of our fans in 2013!