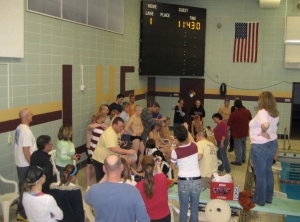 The men’s team swimmers, parents and families threw a big party Friday (2/3) in honor the head-shaving tradition. The parents had delicious food from pastas to subs and, of course, great desserts!

After the guys ate all of the good food – the shaving began. It’s a Rails tradition to let the parents shave their sons’ heads, first with an electric razor and then with shaving cream and four-blade razor. This makes the guys’ heads extra smooth for the big meet the next day (usually!).

After an evening of fun – the team got to do a reshave two days later due to the meet being canceled. Now they’re ready for districts. You can read more about the districts meet here. 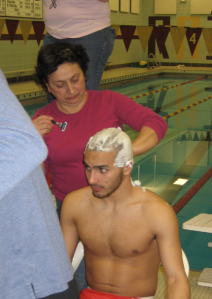 Why Shave?
Swimmers are often asked why they shave their heads. The simple answer is speed. Hair slows you down. However, there’s more to it than that. Having your scalp exposed to the water directly stimulates nerve-endings in your skin. It gets the blood moving, the heart pumping; ultimately helping kick off the adrenaline boost that comes from a race. That spike leads to speed and faster times.

And who wouldn’t want that!?